Before we go deep into the focal point of this article, with the evolution of the laptops the global education ecosystem is also transforming, we need to consume some hard stats in the first place. If you are not a firm believer in this outlook, that’s ok. But, the existing global picture of this particular discourse is pretty intelligible. As usual, numbers never lie so its best to support this issue with some fascinating stats that would entice your soul.

Firstly, according to Statista, an envied name on the web for toying with statistics, the most popular devices among the students in the US are laptops. Moreover, 80% of these school and college goers believe that laptops or similar portable electronic devices are the linchpins behind their superior grades. A recent survey shows a distinctive US student spends 56% of the entire classroom time within a week with his/her laptop. Where the same stat is around 51% for the tablet PCs.

Secondly, the following image supports the fact that global educators or teachers are getting pretty vocal about the future scenario of the education which looks more digital less traditional. 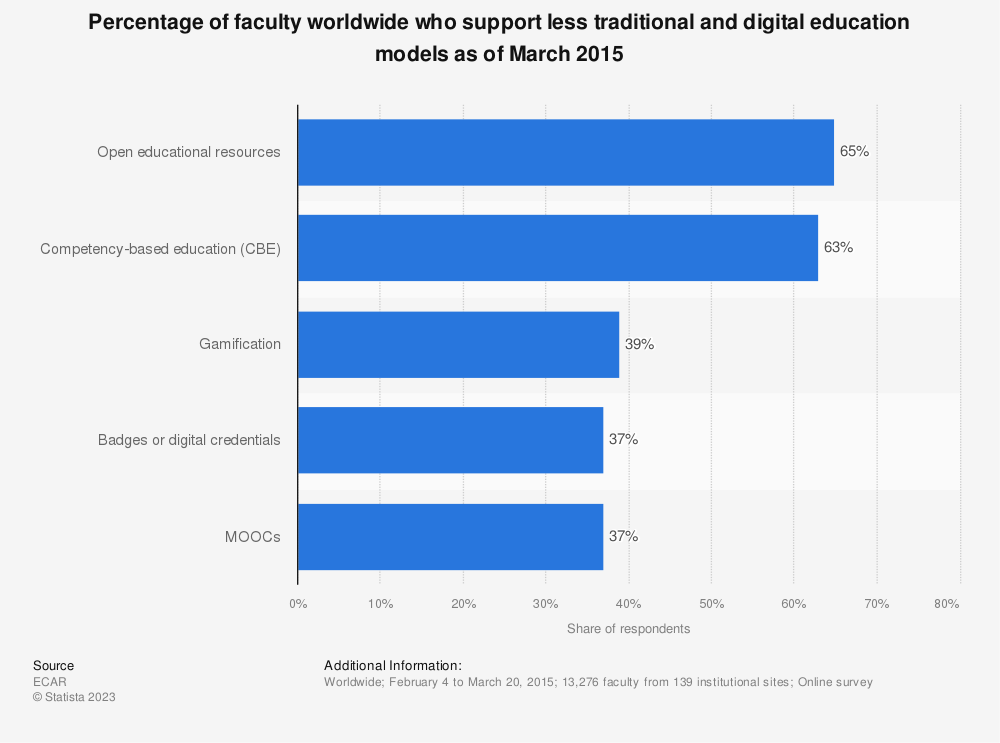 Most of us have faced some common things in our schools and college days. Wooden flip-tables, blackboards, teachers writing on those blackboards are telling us to copy that. The good old traditional education system. Thankfully, the global digital transformation has changed everything around us and It’s a no brainer.

Today, most of the classrooms are equipped with projectors and dedicated WiFi points where students​ can carry their own laptops and get connected to the internet and dig deep into the core of the discussed subjects within seconds. It’s more interactive. It’s more efficient if the usage of the class time is concerned.

The Evolution of Laptops

The transformation of the education system is greatly dependent on the paradigm shift in the design of modern laptops. Admittedly, we already have replaced heavy desktops with a range of sleek and portable laptops. And, everyday laptops are getting smaller, smarter and lighter.

Starting from the first portable laptop namely, Osborne 1, which was too heavy to carry along with its limited features, the global evolution of the laptops has walked a long road since then. And, during this journey laptops got smaller in their dimensions and smarter in their applicability. Now, we are at the age of hybrid devices that carry both the processing power of a full-blown laptop and the ultra-portability of the smart handhelds. We name it, 2-in-1 laptop tablets or ultra-mobile personal computer or UMPCs.

Some of the best existing UMPCs are Falcon 8 inches 2-in-1 laptop-tablet, GPD Pocket 2, KSPRO 8.2 inches UMPC and Viliv S5 Premium. These devices are mostly 8 inches wide, weigh around 700grams, run Windows OS, have brilliant and energy-efficient touch displays with a full-fledged keyboard​ and all day long battery backup. The real fun is, these smart devices easily slip into your pockets and school bags. They are ready to make you blast through almost all educational tasks that you face in your classroom within a whisker.

TheEconomicTimes says, that according to a recent study in December 2018, they found out that currently, 627 million Indians are able to access the internet and, most surprisingly,  97% of this chunk of population access it through their smart handhelds. Statistically, most of these web surfers fall into the category of students. Similarly, Nigeria, the busiest African country on the web, houses around 112 million internet users and 74% of them connect to the web using their smartphones and tablets. Merely, 24% of them are PC users.

Yes, the evolution of laptops was necessary to infuse this great amount of web traffic with such devices those has the power of a standard laptop within the size of a handheld. And, it’s happening. This evolution of laptops had witnessed many watershed moments along its way and the future of education is appearing even brighter.

The Transformation of Education

The transformation of the education sector, with these technological advancements, can be analyzed by the two most important factors which make the process of learning a real fun. The factors are scope and interaction. How? Let’s explain.

The traditional education system had its limits. Appallingly, there are remote corners of this planet where the education system hasn’t yet transformed or devoid of this meteoric rise of technology. No internet. No laptop. Less teacher-student engagement. Thus, less scope and almost no interactive learning process installed. Thankfully, the educated and the kinder part of this globe is ballooning their efforts for them and addressing these issues with the help of available technologies to deliver them a better way to learn and live.

Now coming to the brighter side, an internet-connected laptop enables a student to look for relevant data on any topic, almost instantly, right from his classroom. The scope. Added to this, the teachers and the students can harness a better way of interactive learning using smart devices – an Increased level of student’s engagements with their subjects. There are lots of other key benefits of using laptops or such devices in a classroom like efficient note-taking activities, laptop-based academic tasks within classrooms, better collaboration among student groups working on common projects, increased focus, improved efficiency, and the availability of required information from the web.

Likewise, the following image is the result of a survey done both on teachers and students under the subject, ‘in-class usage of portable electronic devices’. The bar chart shows the real transformation of the global student mentality for using laptops during their classes and it’s the cornerstone of the digital transformation of education.

Furthermore, the following image shows the actual usage of laptops among students having different seniority levels.

Now, what are the cardinal factors which are controlling this transformation of education? Yes, there are many according to the ResearchGate. Firstly, a large portion of the current global population is computer literate and their infants too. So, for the budding students, it’s like computers first and schools second in their lives.

Secondly, the ‘do it now’ mentality of the human life-philosophy is keeping the young students on their toes. They are more hungry to grow fast and learn fast. And, for that, being able to use technology anytime and anywhere is their prime concern as most of the modern schools and universities are offering full WIFI-enabled campuses.

Thirdly, the price of futuristic and smart laptops are getting slimmer. Now, most of the college students can afford to buy devices of their own choice and needs. Now, smart devices are offering smarter prices to penetrate most of the global markets.

Lastly, the brutal truth is that the change is the only constant and it’s true both for the evolution of laptops and the transformation of education and when they go hand-in-hand the future beams with endless possibilities.